skip to main | skip to sidebar

A REVIEW OF CAREER OF XOSÉ FILGUEIRA VALVERDE AS THE TEACHING 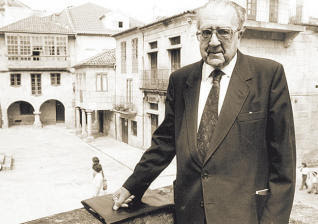 ABSTRACT
This study shows mode of XFV as a teacher. His life was analysed in order to unravel his “educational” role before and during his Chair position by exploring his background.
KEY WORDS
Xosé Filgueira Valverde, educator, professor, director, educational and cultural environ

We have conducted a intensive research trying to underpin the teaching role of the  XFV an educator and intellectual of during his professorship in Pontevedra, Xosé Filgueira Valverde (1906 -1996).
XFV was in became the a teacher because of his wiling with the permanent intention of "giving education or training", with a didactic effort beyond the Chair position, had to receive first a careful education, as actually. He was fortunate to be a well-trained person.
Starting from a broad concept of what is education and that we all educate each other, that everything educates, that we are influential and interdependent beings and that we have to take into account the person and their socio-family context; The personal conditions and the surroundings of Filgueira Valverde were very favorable for their educational development and their "becoming" as a teacher and intellectual.
Xosé Filgueira Valverde was a person with a great capacity for work and personal effort, very disciplined, very constant and organized in his work, first as a student and then as a professor and humanist researcher.
A constant, beloved and valued activity was the act of reading and writing; He read and wrote very well throughout his long life. He had a great reading ability and a very fast reading speed. The Jesuits expelled from Portugal at the beginning of the last century and settled down in Pontevedra left a strong footprint in the boy and young person Filgueira Valverde, they taught a method to him of fast reading in "sesgado" and they facilitated the first contact with Camoens to him, that would get to be one of his specialties and what more prestige would give. Let us also remember the affection and the bond that would keep the "fraternal Portugal" with the men of the generation Nós and the young people of the group of the Seminary of Galician Studies.

We continue with our research that will have the form of a doctoral thesis that we will be able to defend as soon as possible.
Publicado por FILGUEIRA VALVERDE por Xermán Torres en 10:45